Fun with World Literature II: Offer to Brad Pitt of the Role of Cleante in Tartuffe

Here is a blast from the past that I got a kick out of and enjoyed revisiting. Written back in 2014, it was not only a fun piece to write, it is an interesting time capsule.

Dear Mr. Brad Pitt,
I am the director for the new film version of Tartuffe.  After careful consideration of each role, as well as your choice of roles in movies like 12 Years a Slave, I feel that you would be a great fit for the role of Cleante.   As a current resident of France, I am sure you are familiar with Moliere’s work.
Cleante is a man of great reason, who believes in the good of mankind, of Christianity and of those would wish to do the good work of the church.  He does not suffer fools or charlatans well.  One thing that you have been known for recently is your charitable work and you have been a champion for the people and the rebuilding of New Orleans, even when most have moved on from the disaster.  You have been a voice of reason and good to bring attention to your causes. Cleante tells to Orgon to “Look for simple goodness-it does exist.” just as you do (Moliere 59).  From your personal character, I can just hear your saying line such as “”Judging others live is so unfair. Heaven seems to say ‘live and let live,’ and our task, I believe, is to forgive.” (Moliere 49)
This role, in a way, also harkens back to one your performed in the 90’s; the character of Louie from Anne Rice’s Interview with a Vampire.  Louie was the tortured moral center of the film.  He questions how vampires can be allowed to exist within society when they view humans as prey.  Louie points out the hypocrisy of his and other vampires’ existence; he feels like a fraud.  Cleante points out these same qualities in Tartuffe.  He first attempts to appeal to Orgon first, stating “You have been corrupted by your friends, you know of whom I speak. Your thought depends on people who are blind and want to spread it Like some horrid flu…I see thing clearly. And what I see is loud lip service, merely…” (Moliere 23)  When he cannot convince his brother-in-law, he then confronts Tartuffe himself, declaring, “Yes, everyone is talking and each word diminishes your glory, rest assured. “ (Moliere 48)  You would once again be able to play the part of conscience, yet without all the torment.
Last, but not least, your real life role as a father and fiancé would make you a great fit for this role.  This is Cleante’s family this imposter has infiltrated, and he takes his nefarious actions against the people he loves very seriously.   When Orgon disinherits his son for trying to get his father to see the truth about Tartuffe, it is Cleante who comes to his defense.  He confronts the false holy man with his complicity in what has happened, stressing “…But you decided to just sit back and watch him be exiled from his own father’s house. Were he a child, then, really, would you dare to treat him so?” (Moliere 48) His love of family is something any parent can relate to.
As you can see, much thought has been put into offering you this role.  Please let us know of your decision as soon as possible.


Posted by The Mighty Aquarian at 1:31 AM No comments:

24 Hours in the Life of Me the Writer 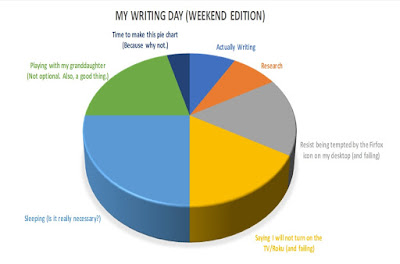 Posted by The Mighty Aquarian at 11:36 AM No comments: