I am doing a post that are basically two posts, but are similar enough that I'm posting them as one as they complement each other.

The Ugliness of 21st Century Politics in America
Though I find that the older I get, the less surprised I am anything people will do, I am still able to be shocked and horrified at the depravity that humans are capable of. Such is the case of what happened to Jacob Burris, campaign manager for Arkansas's Third Congressional District Democratic nominee Ken Aden.

This is a story that affects me on a number of levels. The deprived individuals that committed this heinous act may or may not have considered that:
I feel Mr. Aden, veteran and former combat soldier, said it best.

“It is one thing to engage in civil political discourse, and for Republicans and Democrats to disagree with each other, which is an expected part of the political process. Taking it to this level is beyond unacceptable.”

I have a sinking feeling that the individual(s) responsible for this, if we ever find out who this was, are going to "claim" to be 1.) Christian, and 2.) conservatives. Jesus was for feeding the poor, healing the sick and loving each other. He was against war and violence, and was for finding better way to resolve our differences. He traveled from town to town with like minded folks to speak of love and peace. And he sought no forms of monetary gain to do so. The Christianist, (to borrow the term from Andrew Sullivan), would refer to their own savior at a hippie liberal. Personally, I don't think Jesus would want to be associated with their actions, but he would forgive and welcome them. I don't think the other side would do the same.

On the subject of Jesus, he is commonly referred to as The Lamb of God. Hey...that's an animal. He is even pictured as holding, very lovingly, a lamb. This is something that is lost on these individuals and politicians like Sarah "the only good animal is a dead animal" Palin. (Yes, she actually said that.)

Just one more thought on this, ANIMALS WERE HERE FIRST!!! And if we as the human race, (of which we are animals as well), do not get our act together, they will be here long after us as well. Don't believe me? Ask the dinosaurs. Oh wait...you can't.

Animal Protection Taken to the Extreme
Here is a little something a friend posted on Facebook. (Original poster credit goes to The World According to Atlas.) 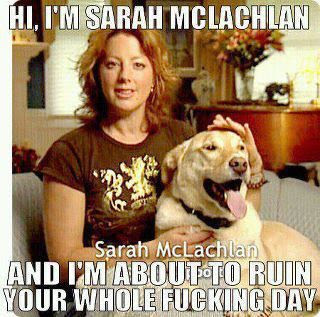 Honestly, I know MANY people who feel this way about this commercial. This is not to say that the ASCPA or the number of other pro-animal organizations aren't doing good work by rescuing and caring for these very needy animals. They do have great intentions. But to play this very depressing commercial over and over and over and over and over, (you get the point), again will have the opposite effect of what they are trying to accomplish. Hell, when anyone in my household sees this just the beginning of this ad, the channel is immediately changed, and the 2 minute countdown starts waiting for it to be over.

Here's another problem I have with this advertisement. Yes, I do understand that funds are needed to help these animals. Got it, have no problem with that. But what they really need is a good, loving home. WHY ISN'T ADOPTION BEING TALKED ABOUT AS AN OPTION!!!!

Giving your $0.05 a day or however much they say is all fine and good, but it's an easy way for someone to say I helped and feel better. I will concede that for some, this is the only way they can help, but for many it is just easier to throw money at the problem than to take the commitment of investing time, are and love into a pet.

I guess you could say I have gone "all the way" in my commitment in helping an animal in need. I spend $15-$20 a month on food & litter, plus treats, plus toys, plus any vet visits and medications she needs. I also pay for her home and provide her with all her utilities. (Because, let's face it, it's her place. I just visit and sleep here in between jobs and getting kids wherever they need to go.) She also gets to jump on me in the middle of the night if she feels she needs something, demands we feed her when SHE thinks we should, steals my cell phone because she thinks it's her "competition", yells at me when I am not giving her my undivided attention, and claims anything in the house she wants. She also loves her family as unconditionally as we love her.

What can I say? She is my furry baby, and is totally worth all of it. So to all those we-want-to-guilt-you-out-of-your-money commercials, I'm walking the walk, so leave me the hell alone! And if you want to really get people to help, why don't you show them picture of how happy the animals are that are being helped? People like happy animals, and to know that their money IS being used to make a difference.

Okay, I've said my two cents. I will not step down off of my soapbox for the evening and go to bed. Good night and good luck.

Posted by The Mighty Aquarian at 12:46 AM No comments:

To Those Who Insist That We Were Founded as a "Christian Nation"...

...you MUST have been asleep during your history and/or civics classes. Seriously!

The first clue that we were not founded as such is the First Amendment. Second is the Free Exercise Clause, which was written to accompany the First Amendment. Oh, and then there is the little law referred to as Article 11, The Treaty of Tripoli. (And to those who feel that their argument against this being proof that it was the forefathers intent simply because in the Arabic version the "non-Christian" nation part, it is in the English version which is the ONE they all received copies of, read and voted unanimously for. The "Arabic" side could care less what type of county we say we are. The most important part of the treaty to them is the "we promise not to attack you because of your religion" part. So yeah, they didn't say anything about 1797's version of a "typo". Looking for the loophole to prove you side of things is so teenager high school-ish.) With the exception of The Free Exercise Cause, these are actual LAWS written by the Founding Fathers. These weren't written later on. These weren't written as interpretation of what people thought the were the intention of the original laws that were written.

(Side note: I find it amusing that the same people that will poo-poo the First Amendment as proof that we are not in fact founded under "their" religious believes are the first ones to trot it out when they feel someone is trying to "silence" them. Just ask the Westboro Baptist Church. The hypocrisy is staggering.)

Don't believe that the Founding Fathers were passionate about the separation of Church & State. Maybe you should then take a gander at the works of Thomas Jefferson, (Hell the man coined the phrase "separation of Church & State".) or Thomas Paine, or Patrick Henry. Even George Washington, who was devoutly Christian, always spoke of respect for other religions in his public speeches and private letters. Benjamin Franklin, who was raised Puritan and espoused their virtues throughout his life, willingly admitted that he was not a churchgoer and followed the ways of the deist more than traditional Christianity.

The Founding Fathers lived under the rule of Great Britain before they called themselves Americans. They were citizens of a country that was under the rule of a person whose qualification to rule was determined by the parents he/she was born to and documents stating this was so by the word of God. The term of their rule was from the death of said parent to their own death, and their power was to rule their country AS WELL as the Church of England. (Also of note: the Church of England was the ONLY accepted religion in England at the time.) Despite their personal religion believes, (or maybe because of them), they knew and understood the need of keeping religion out of politics, and politics out of religion. Combining the two has served throughout history to be toxic. We should follow our forefather's lead.
Posted by The Mighty Aquarian at 10:00 PM No comments: